Our history goes back over more than a century. ESA, Ecole Supérieure d’Agricultures, saw the light of day in 1898 with the encouragement of professionals from the rural world in the West of France. Professionals who wanted to develop the agricultural sector by creating a school specialised in training engineers in agriculture.

Nearly 120 years of history and change

1898 – Creation of ESA by professionals from the rural world in the West of France. Their objective was to develop the agricultural sector by creating a school that would specialise in the training of agricultural engineers. The school took the form of an association under the Act of 1901 under contract with the State. The school’s status is the same today. The educational direction was entrusted to the Jesuits until the 1970s.
1927 – Creation of CERCA (Centre d’Enseignement Rural par Correspondance d’Angers – Angers rural education by correspondence centre). In response to the agricultural development of the West of France, ESA chose to set up agricultural education courses by correspondence. Developed within the framework of the JAC (Jeunesse Agricole Chrétienne – Christian Agricultural Youth), CERCA was an immediate success.

1950s – Extension of the training offer to take account of the changes in the agricultural and rural world, with the creation of:
– CFTV (Centre de formation de techniciens de la vulgarisation – Outreach centre for the training of technicians); 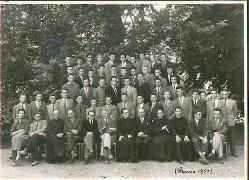 – IPAO (Institut de promotion agricole de l’Ouest – Institute of agricultural promotion in the West); and
– ESFA (Ecole supérieure de formation agricole – School of higher education in agriculture), which subsequently became Agricadre.
Apprenticeship training and continuing education for adults have diversified and expanded what was on offer.

1980s – Creation of the ESA Group. The group was born from bringing all these elements together and has a single governance and management structure.

1984 – The Rocard Act recognised that the private agricultural establishments (under the 1901 Act) performed a public service. This recognition has been an encouragement to expand the work that meets the needs of society.

1990s – New study programme themes: agri-food industries, environment, landscaping, distribution, etc. The aim was to offset the decline in agriculture as an economic activity and source of employment. This broadening of the offer has also made it possible to take account of the interests of an increasingly urban youth.

2000+ – Creation of Masters and Professional Degrees. The provision of study programmes in business and distribution is emphasised by the establishment of Districampus (programmes in marketing and distribution) and the opening of Agricadre in Lille. On the international front, the Group has expanded into the Bac+5 student market and is also active in the major higher education networks.

2017 – Feeding the world with intelligence. ESA is today the French private sector agricultural training centre that brings together the greatest number of students and interns/work placement students. With 210 employees, of whom more than 110 lecturers and lecturer-researchers, it is one of the most important centres of brainpower in its area of business in Maine and Loire. ESA is recognised as a regional player influencing the academic, political and professional world.

A historic heritage focussed on the future: ESA’s Charter

ESA remains faithful to the principles adopted by its Jesuit founders. In 2002, the Board of Directors, which is made up of former students who have become recognised professionals in the area, reaffirmed the values and mission of ESA by drafting a Charter.